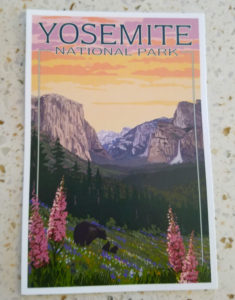 Ahhhh, Yosemite. What can I say? Having lived in California for almost 25 years, I’ve had the good fortune to have visited the park several times in both summer and winter. Alan spent many of his formative years in Yosemite climbing and camping and can tell you stories of just about every rock face and mountain pass he comes across. This is truly a special place for him. That being said, I had reservations about going this time. The Sequoias were so tranquil, and I was really dreading the crowds that Yosemite brings in the summer. My instincts were right. Our first day to the visitor’s center in Yosemite Valley was almost as bad as finding a parking spot at the Whole Foods on 3rd and Fairfax on a weekend (for you LA folks, you understand).

In order for Harlan to get his Jr Ranger badge (you actually have to pay in Yosemite for the book) we had to brave it. We got in and out, but not without its share of crankiness from us all. Ugh. We just wanted out of there. The good part is that on our way out, we found this: 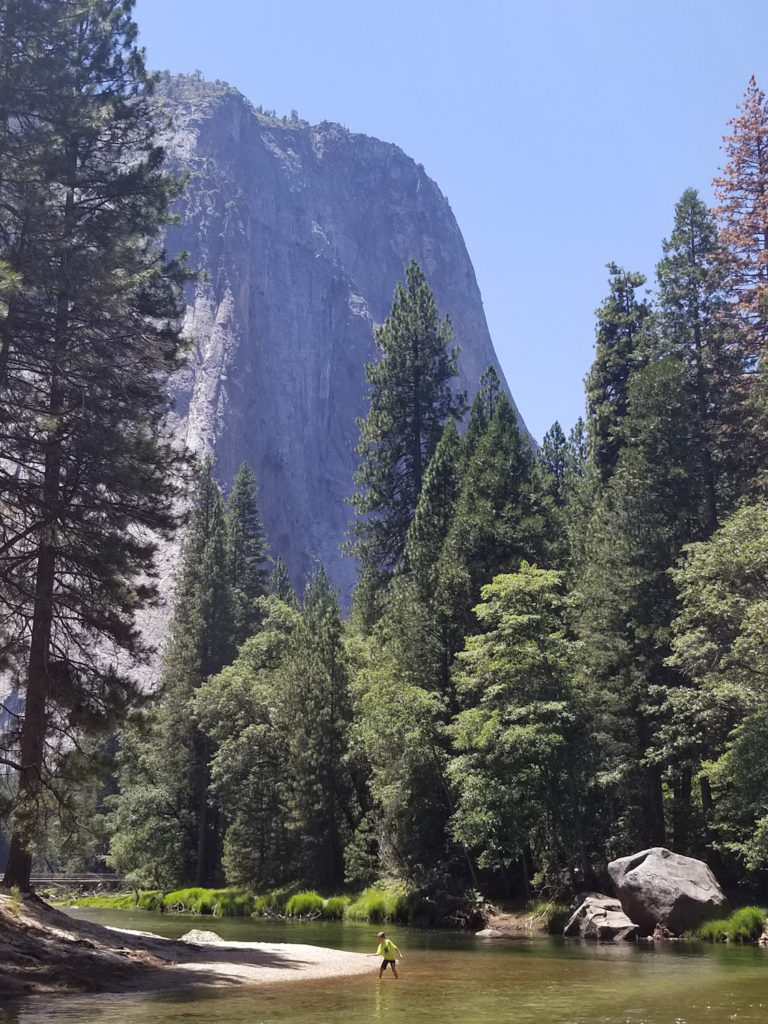 The COLD but beautiful Merced River, where we spent our afternoon away from the crowds

Our campsite was at the Yosemite Lakes Thousand Trails campground, about 5 miles outside the park, and it was fantastic. The Tuolumne river ran right through it and we got to play in this: 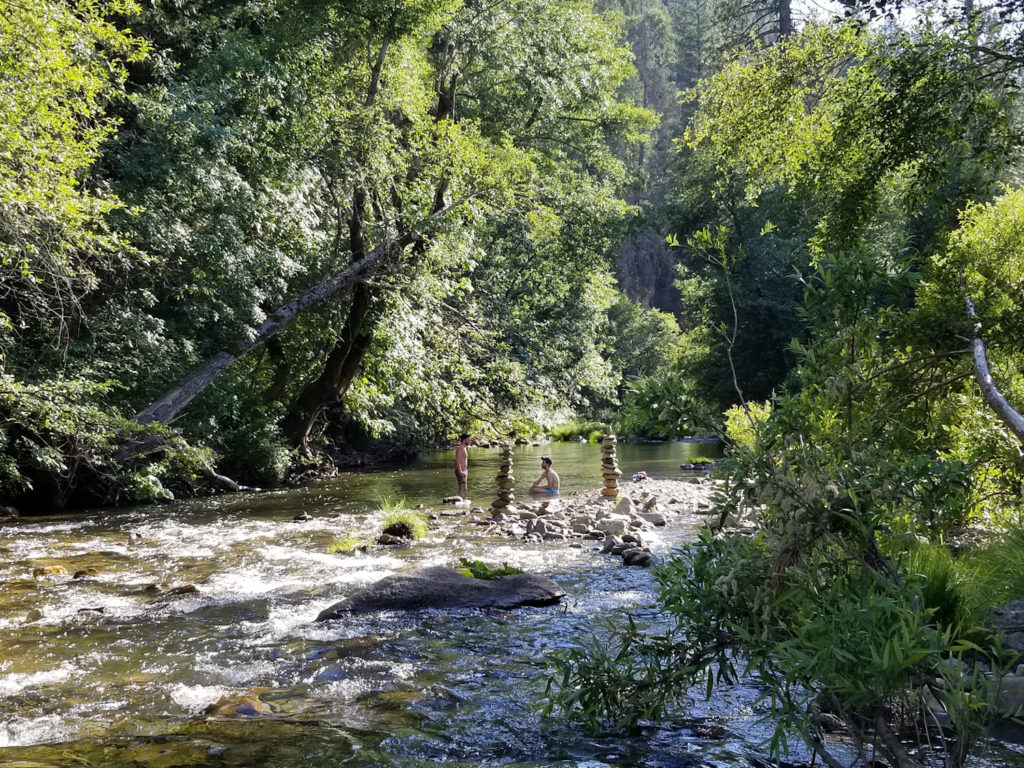 We bought cheapo inner tubes and could float down through the campground. So much fun.

The next day in the park, we spent the day in Tuolumne Meadows, in the high country. WAY less crowded, and much cooler. It also happens to be one of Alan’s most favorite places in the world. 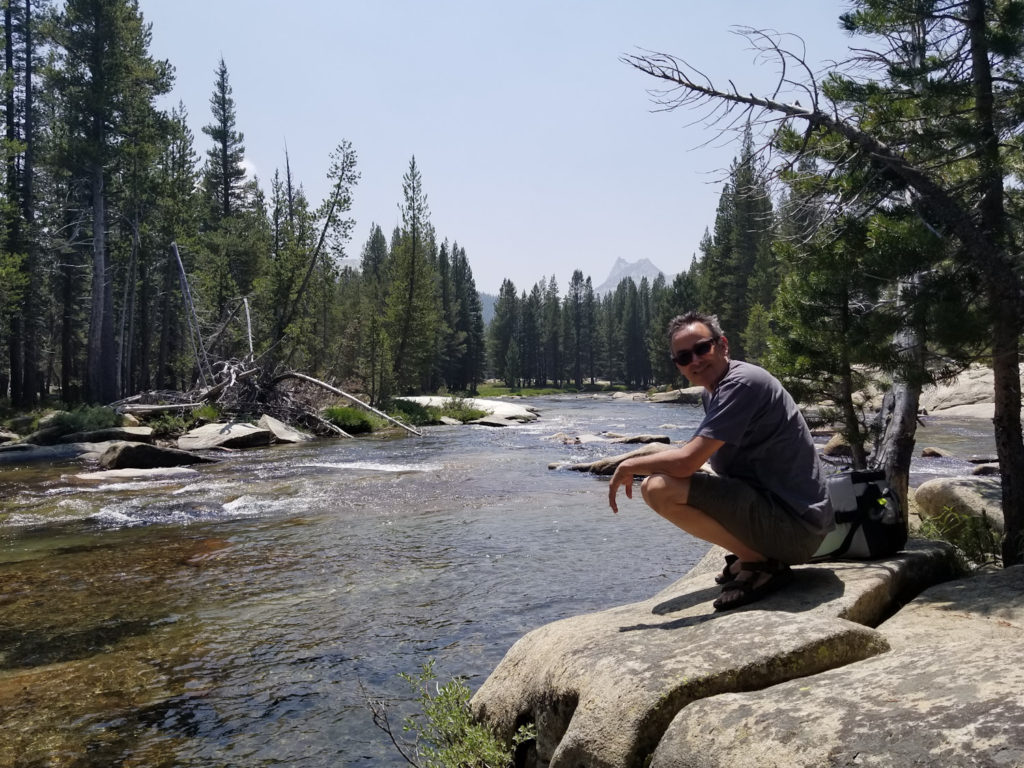 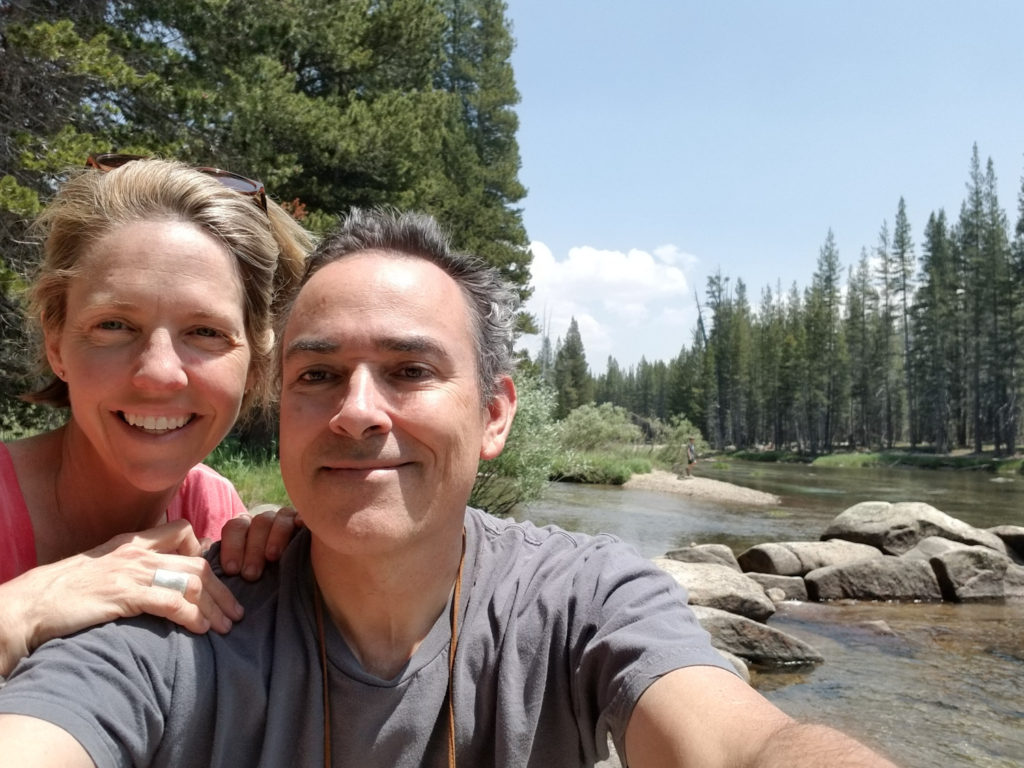 The kids literally frolicked along the banks and tossed stones in all afternoon. It was beyond peaceful…. 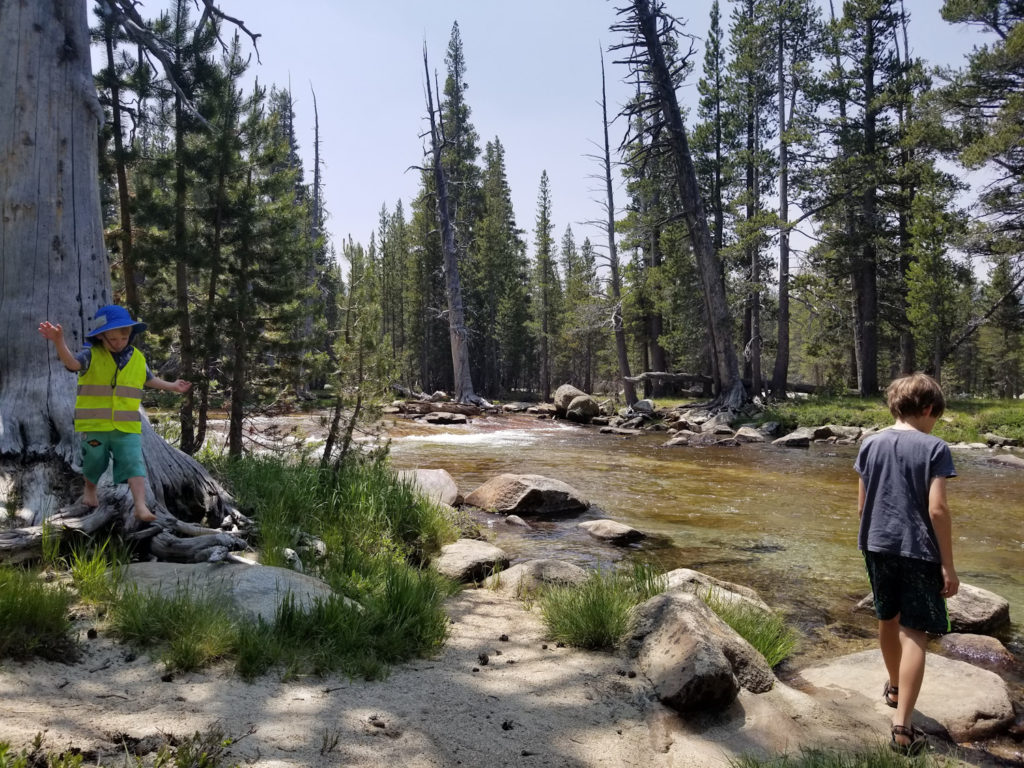 I’d post more pix but my nudie patootie 3 year old frolicking through the meadow is not going on the internet. 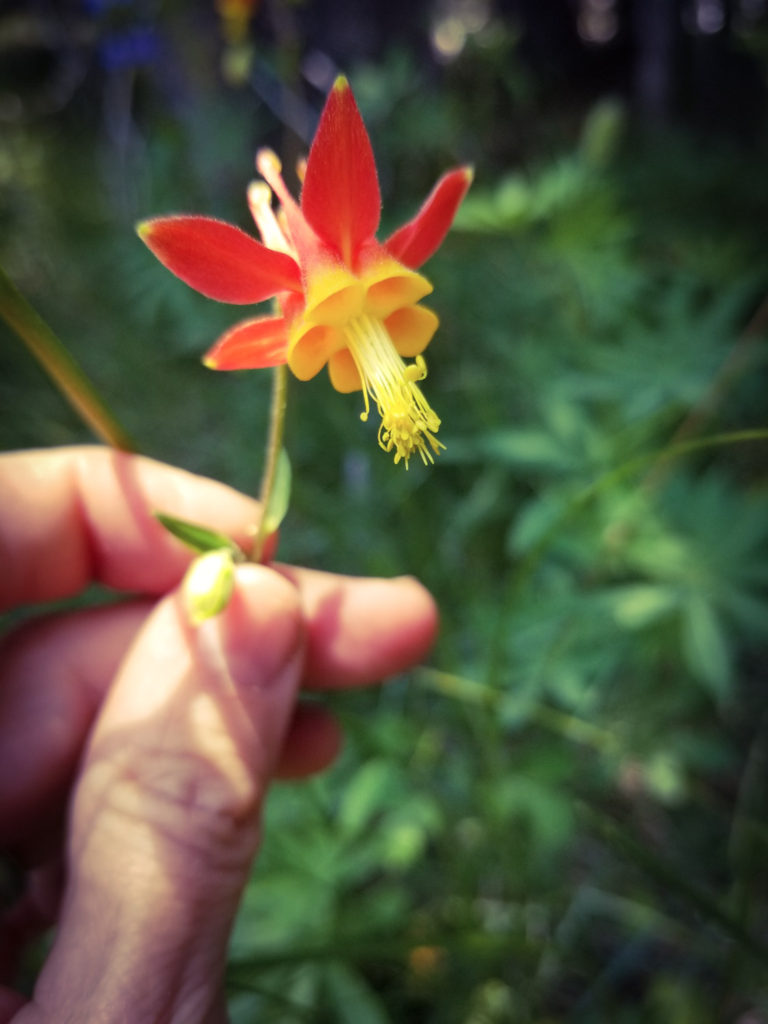 It was time for ice cream so we went to the Tuolumne meadows general store. 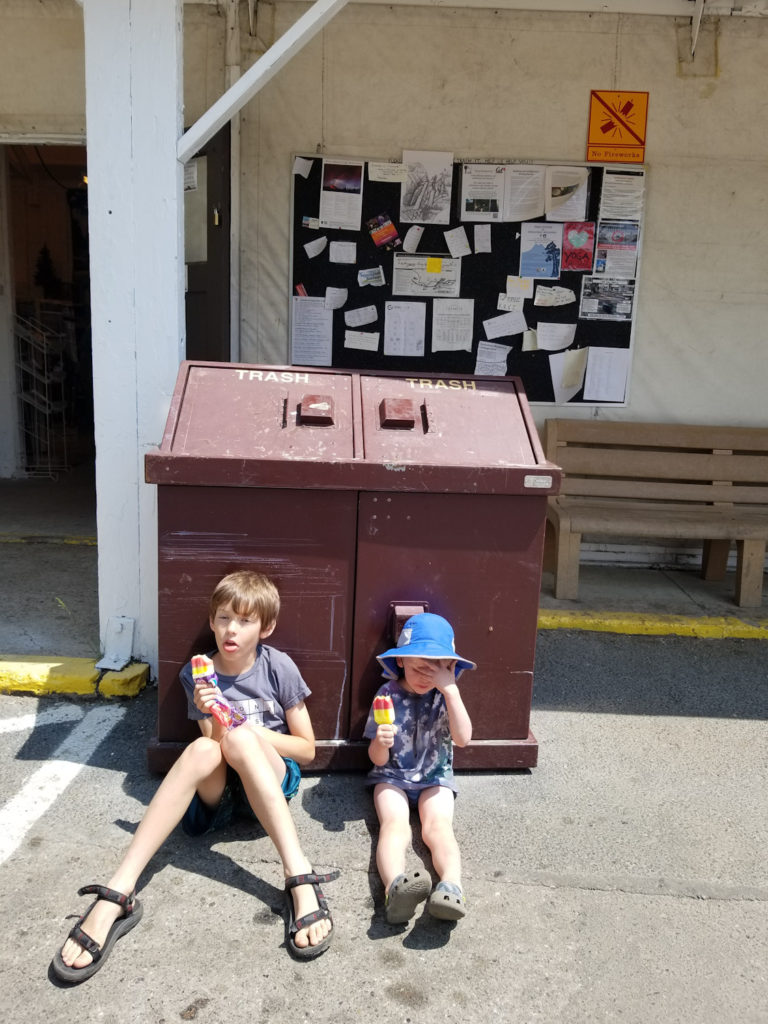 So I thought this place was really cool. It’s a temporary canvas structure that is clearly closed in the winter. In the parking lot, there are weathered backpackers who are seeing civilization for the first time in weeks and fueling up on anything they can get their hands on. When you walk in, (wish I got a pic) is a WALL of  well stocked brightly packaged candy bars, and high density snacks that you know are filling the caloric deficit these hikers are in. Big band music pumping through the air, the white haired man with the long braid standing behind the counter with a jolly hello and a swing in his step, just made my day. It was fascinating to see all the care packages piled high waiting for their hikers to pick them up on their Pacific Crest Trail journeys. I was imagining the joy and excitement of a ragged hiker receiving one of these lifelines along the way.

I loved the message board… 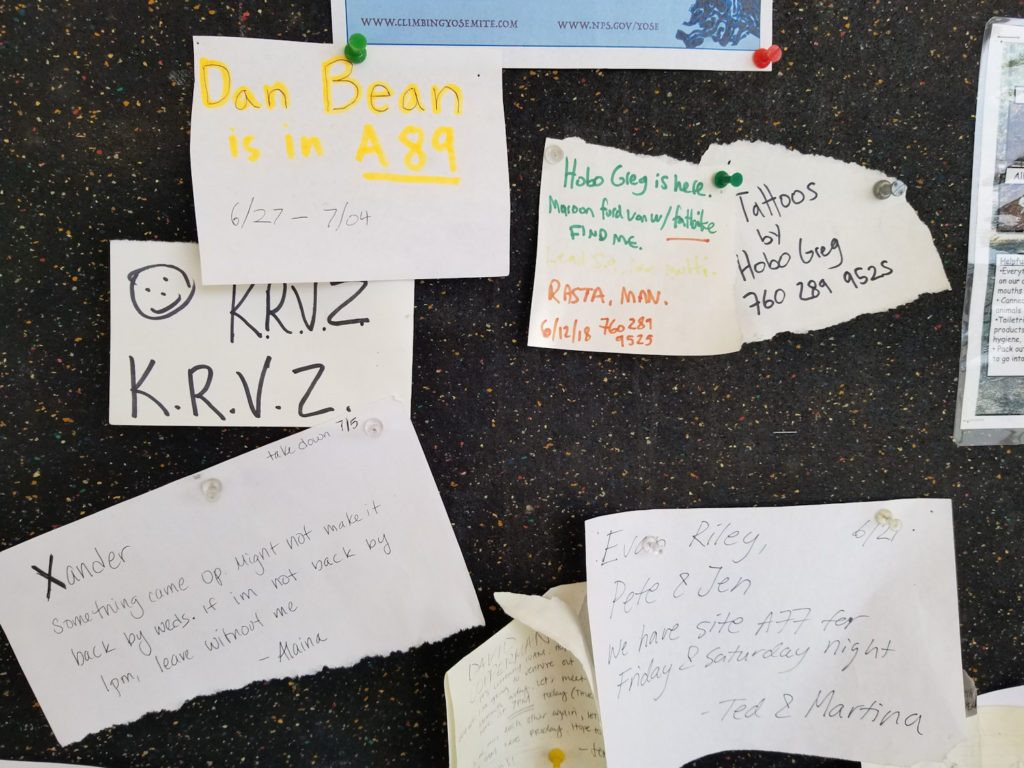 Harlan completed his ranger program for Yosemite and took his vow up in Tuolumne. SO glad we did. The Ranger was so cool, and the building was like an old log cabin. What was the best was the actual log that he had to sign his name in. They have Jr. ranger  logs going back all the way to 1914!!!! Once a book is filled, it gets filed away into Yosemite’s archives. Beyond cool. 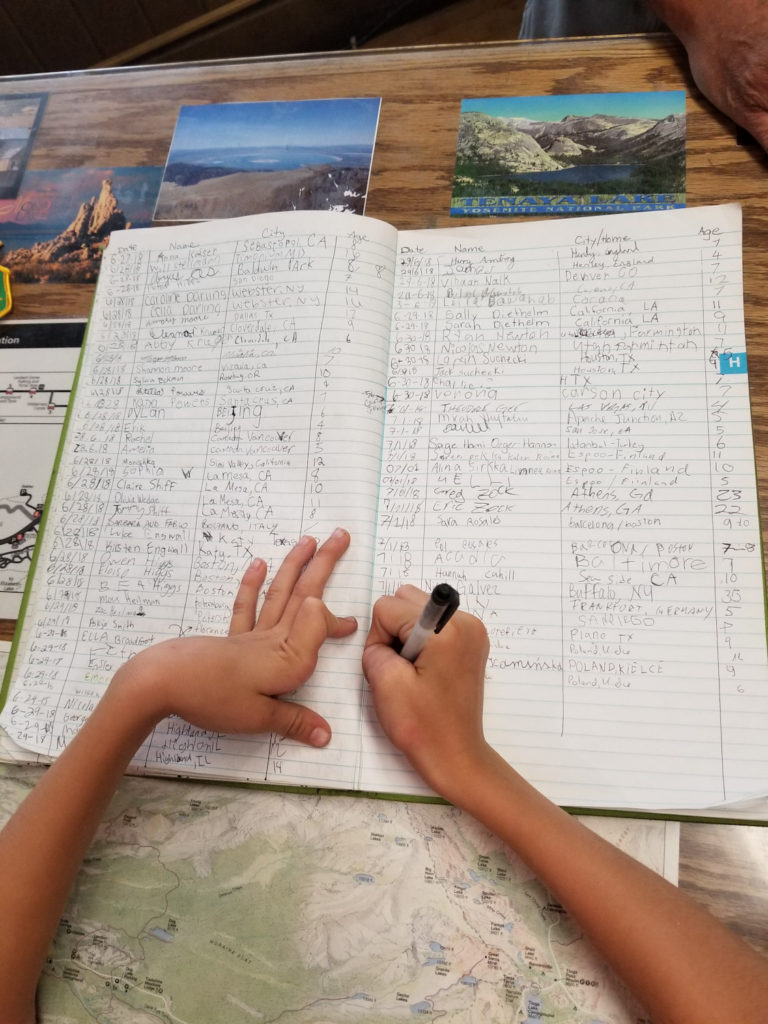 Before we headed back to the campsite, we swung by Tenaya Lake. My dear friend Ana was there weeks before us and posted this amazing photo on Instagram. 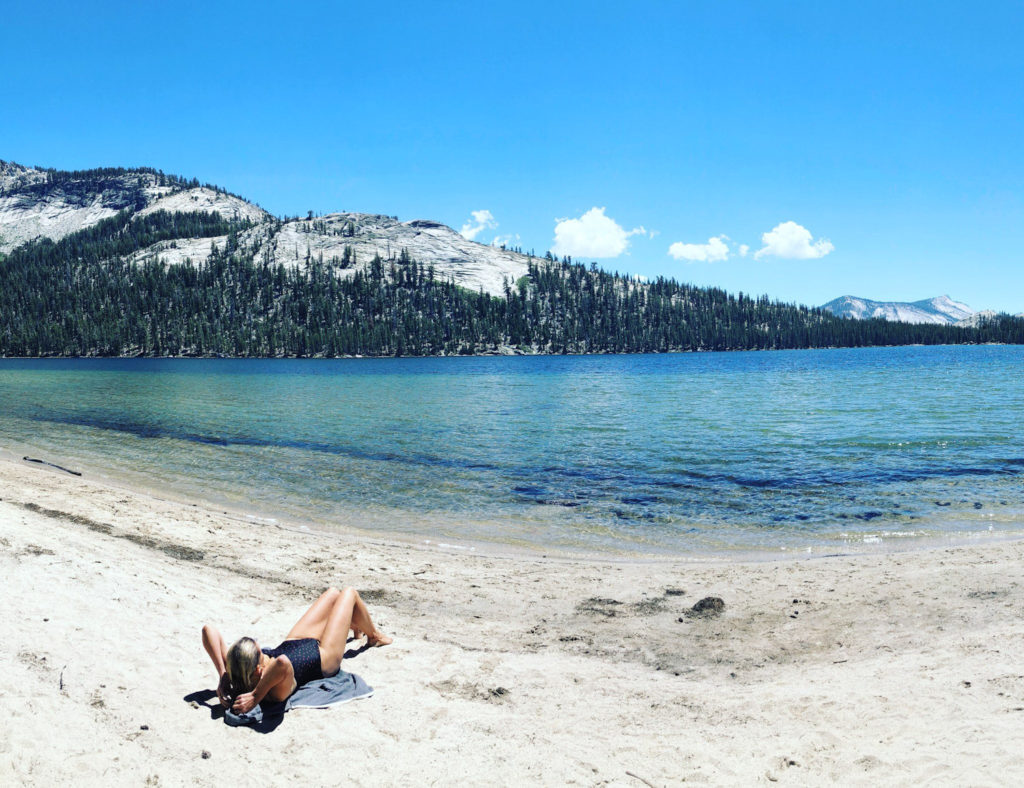 I SO wanted to reproduce this picture and send it to her as a laugh, but Forest had another idea in mind. So here it is. Tenaya Lake. With Kids. 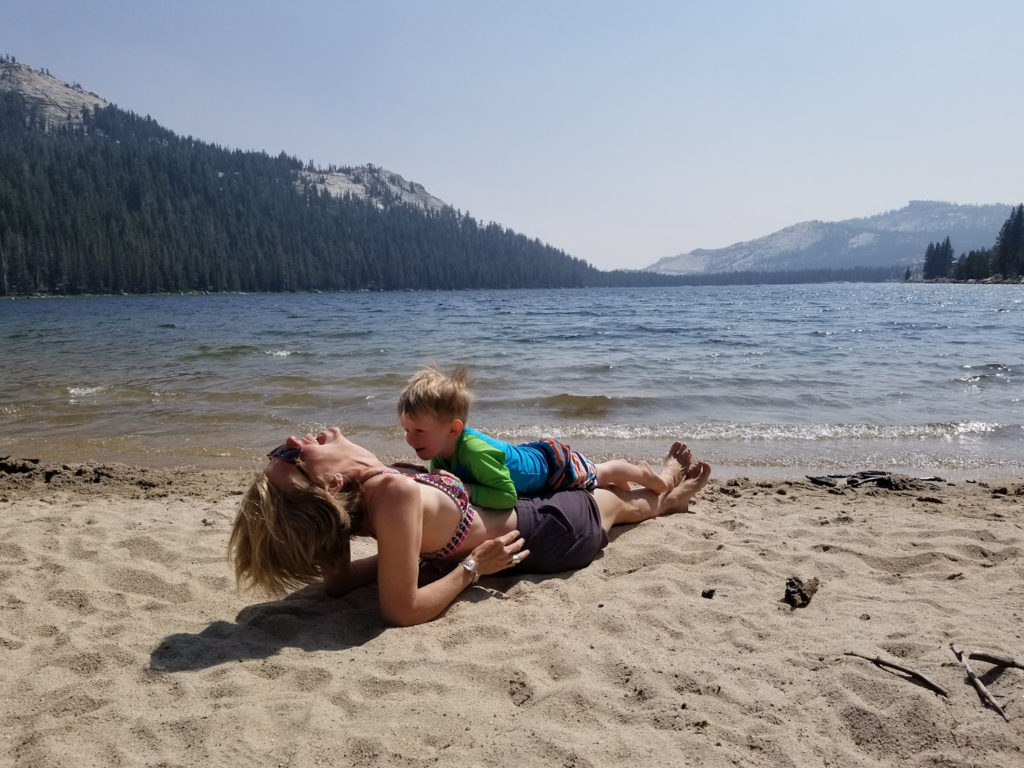 I think I have to work on my Instagrammy filters.

So on to the 4th of July…. It actually felt very quiet after the busy weekend. We decided to spend the morning in a part of the park we had never been to  (and I had never heard of) called Hetch Hetchy. The Hetch Hetchy reservoir is there, which supplies San Francisco with all it’s drinking water. When the dam was built in the late teens, it was controversial, and remains so today. There was another vote on it as recently as 2012.  Many want the Hetch Hetchy valley to be returned to it’s natural state.

This is the view from the damn. That burst of water coming out from the pipes was beyond impressive. 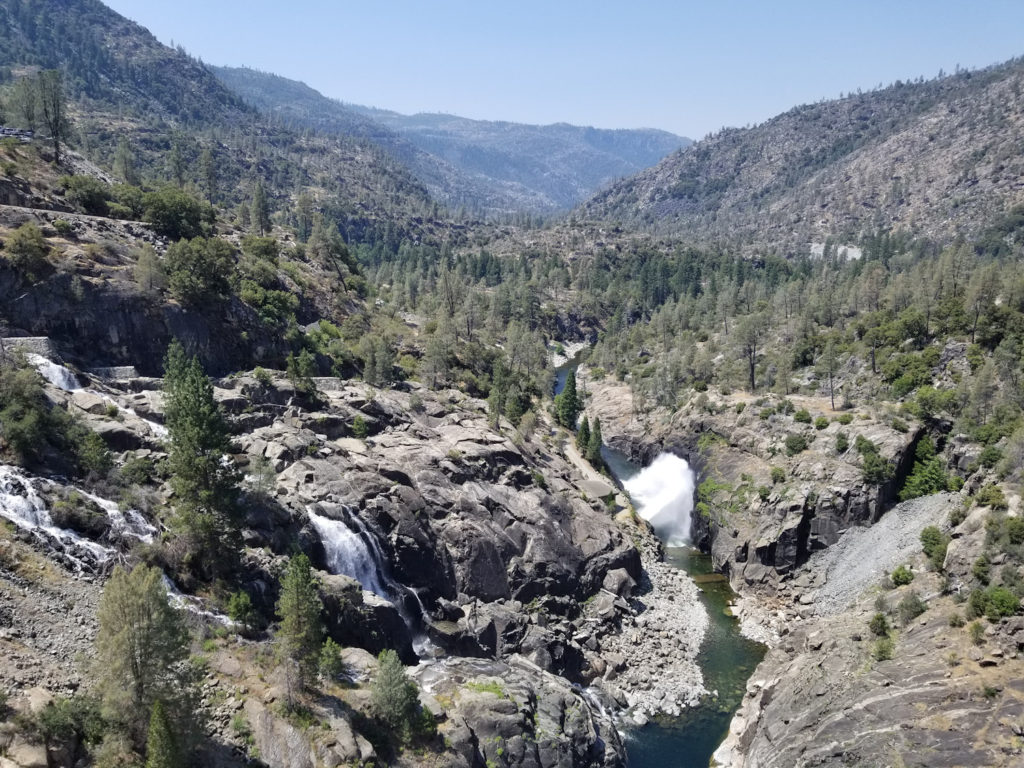 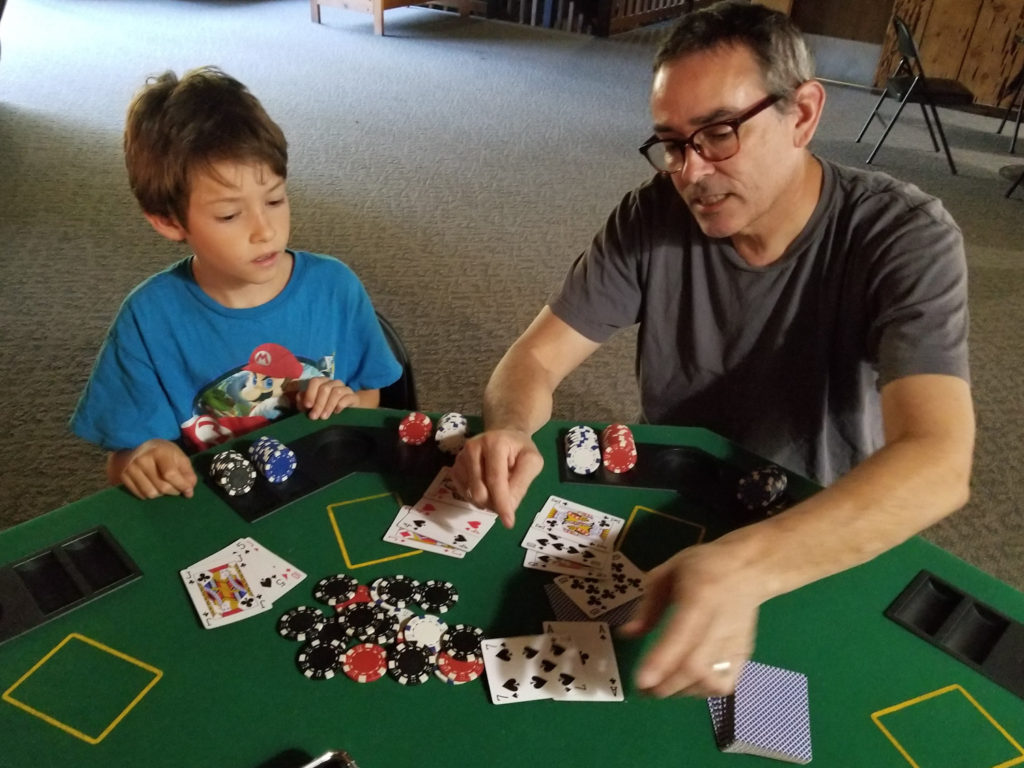 and FREE S’Mores by the community campfire while the karaoke played on in the background.There will be NO video of my karaoke performance. No. 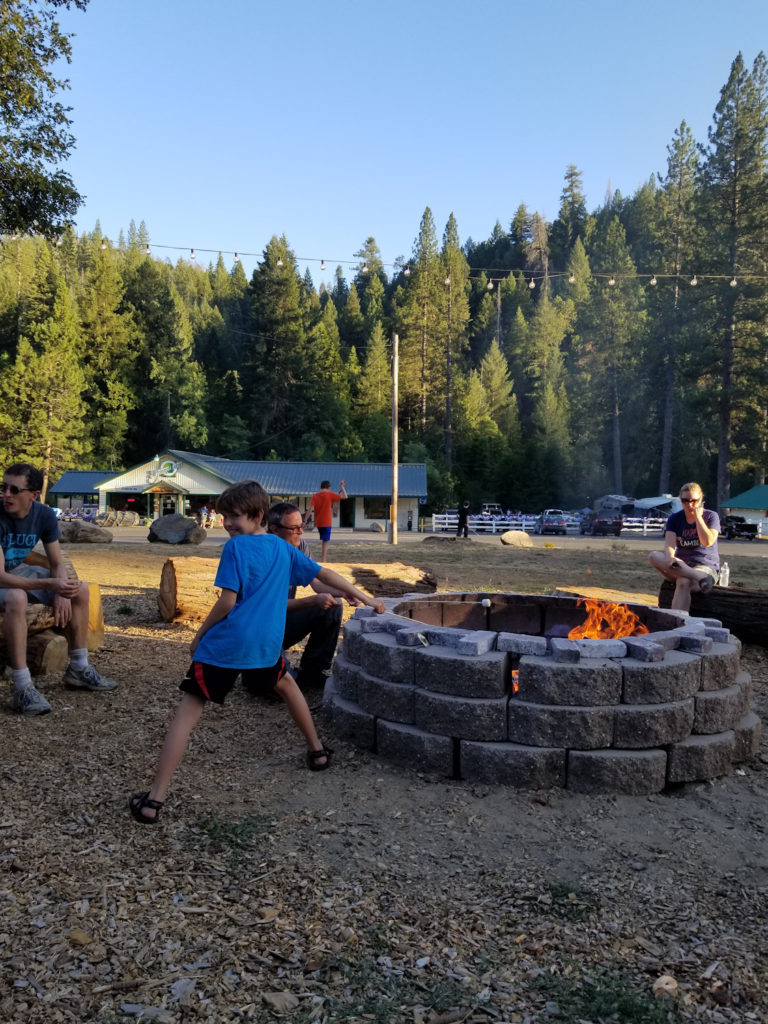 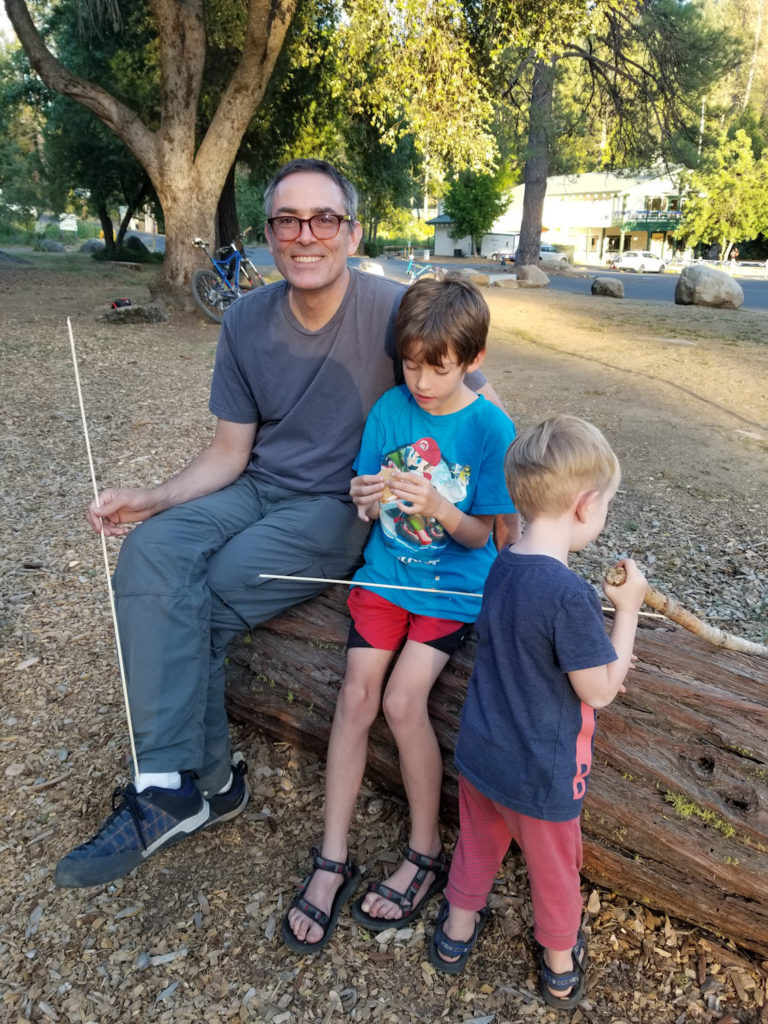 Forest was comatose after sneaking about 2 bars worth of chocolate. I’m not kidding. 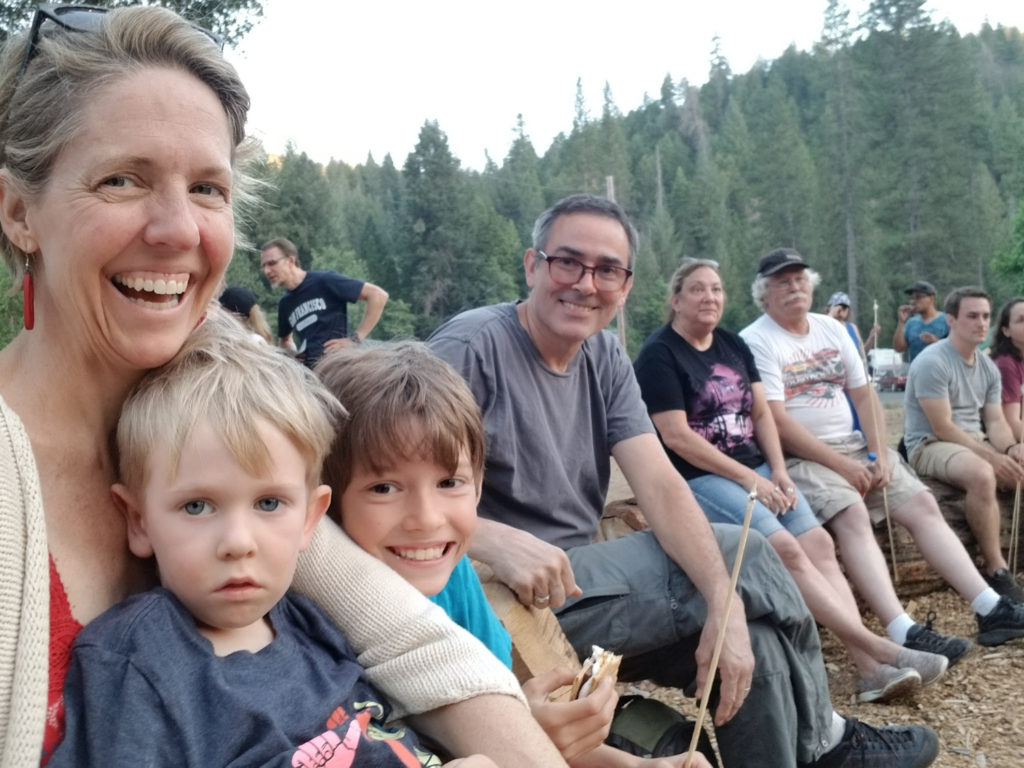 And that pretty much concluded our trip to Yosemite. 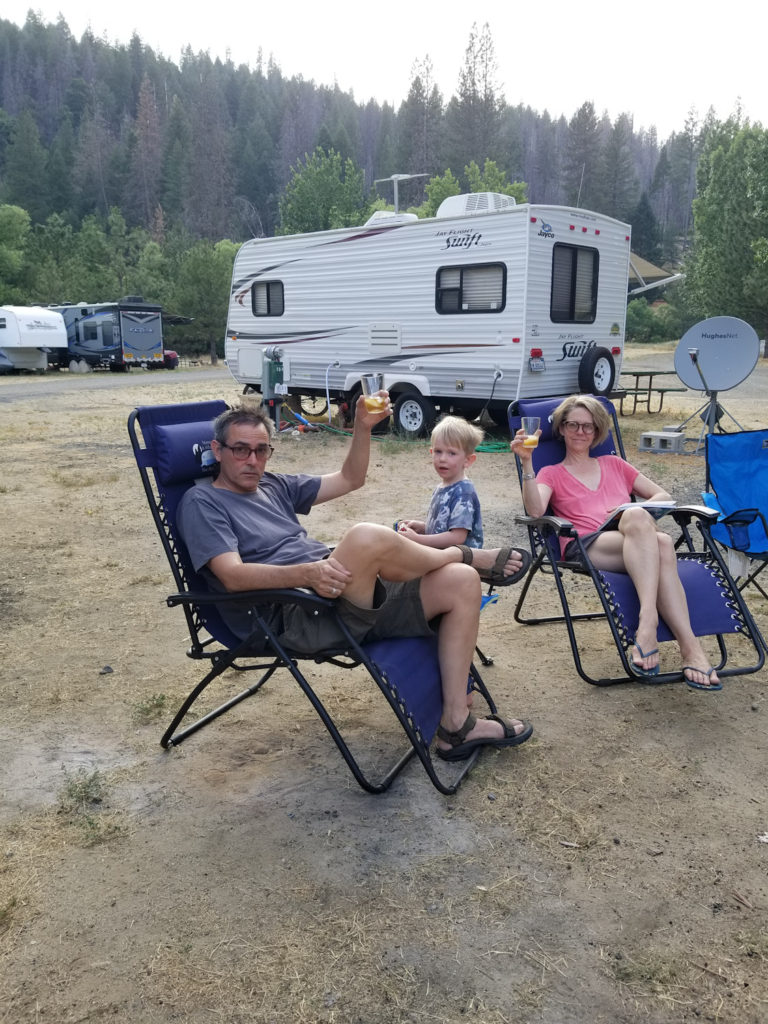