After our trip to Arches, we had a little bit of time to kill before heading to Albuquerque for the International Balloon Fiesta.

We were feeling tired, so decided to head back to Colorado to Pagosa Springs to soak in the hot springs there for a few days.

On our way, we made a pit stop to the 4 corners monument. It was rainy, and muddy, and cold, but it was really fun. 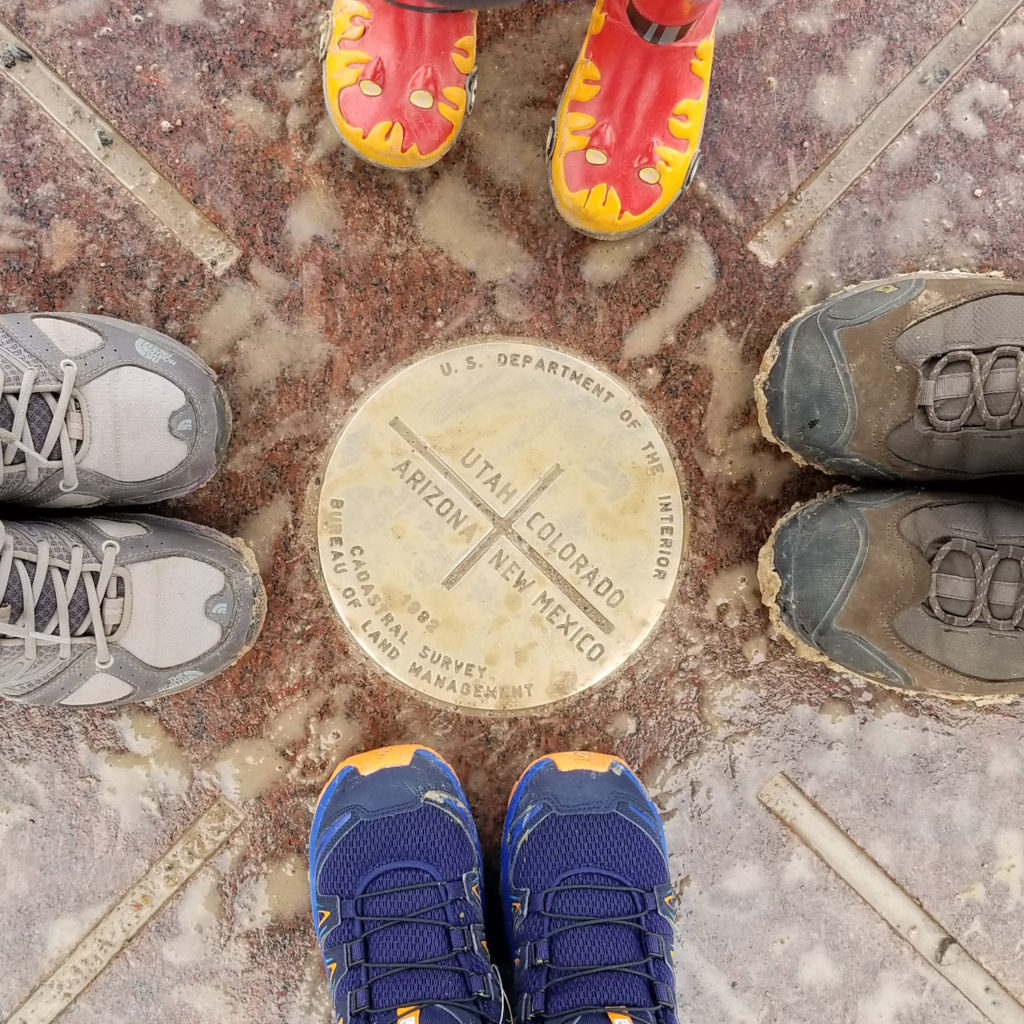 Saying things like, “Alan, where’s Forest? Did you let him  wander off into Utah?” “Harlan, stop  bothering your brother and get in your own state!” never got old. At least for me. 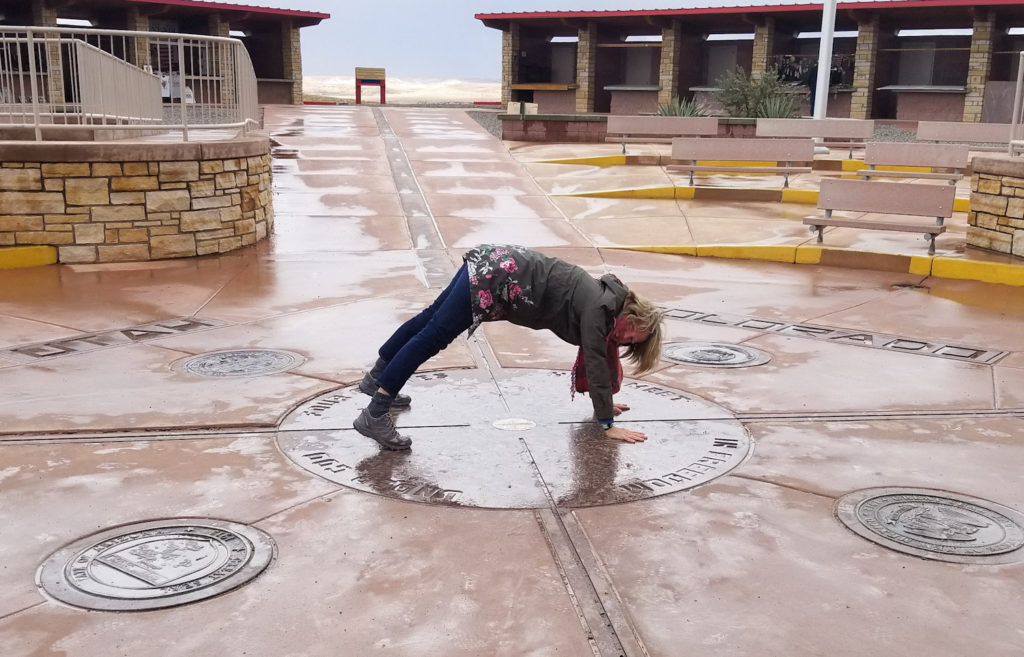 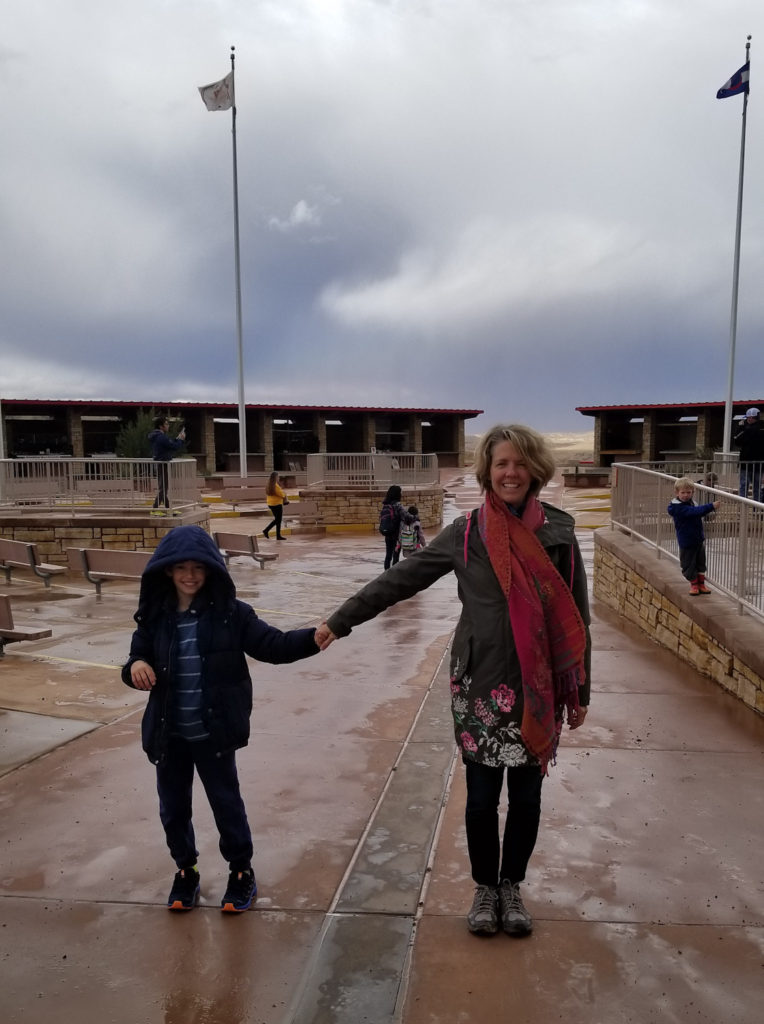 It was really starting to get cold, but when we finally got to our campsite, this was our view… 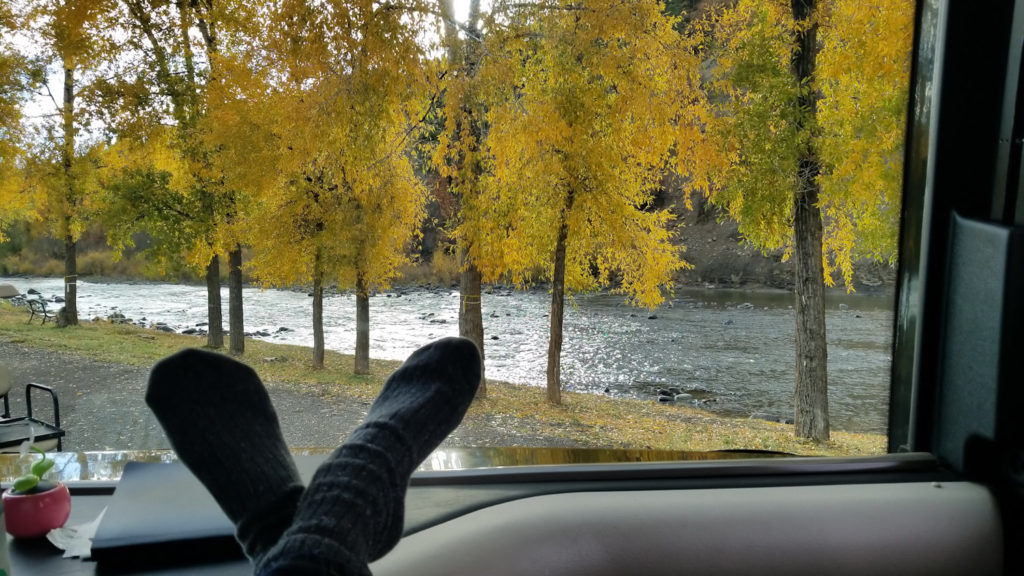 The campsite was virtually empty. COLD, and damp, but all ours.

For the next two days, we went to the hot springs and soak, soak, soaked in the HOT sulfur waters. Alan and I tag teamed and got massages. The kids turned into prunes. 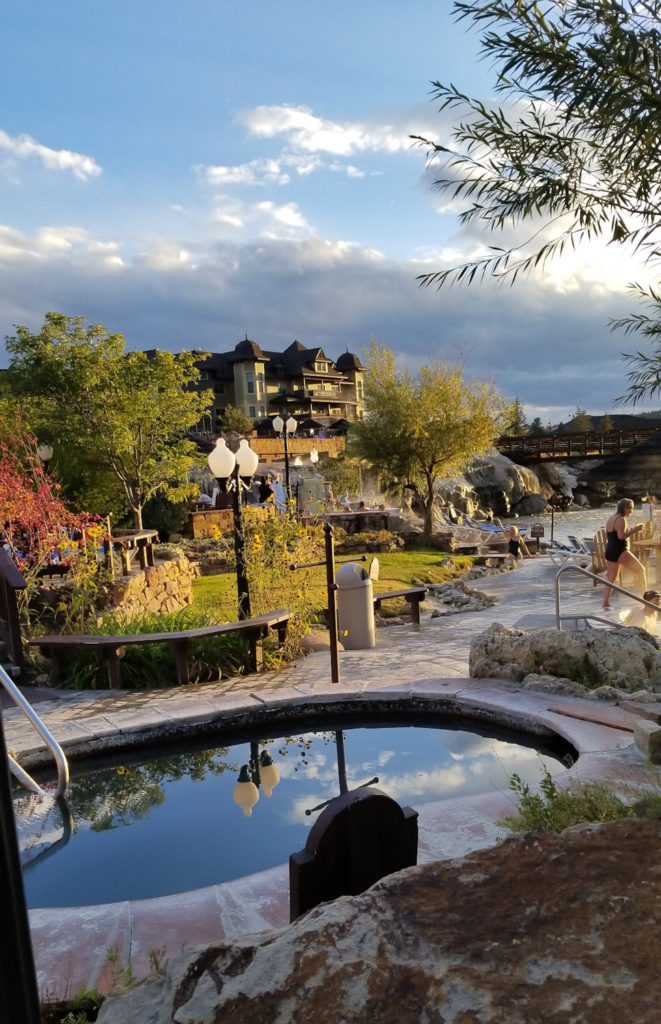 There were over 20 outdoor pools with temperatures ranging from 87 to 113. 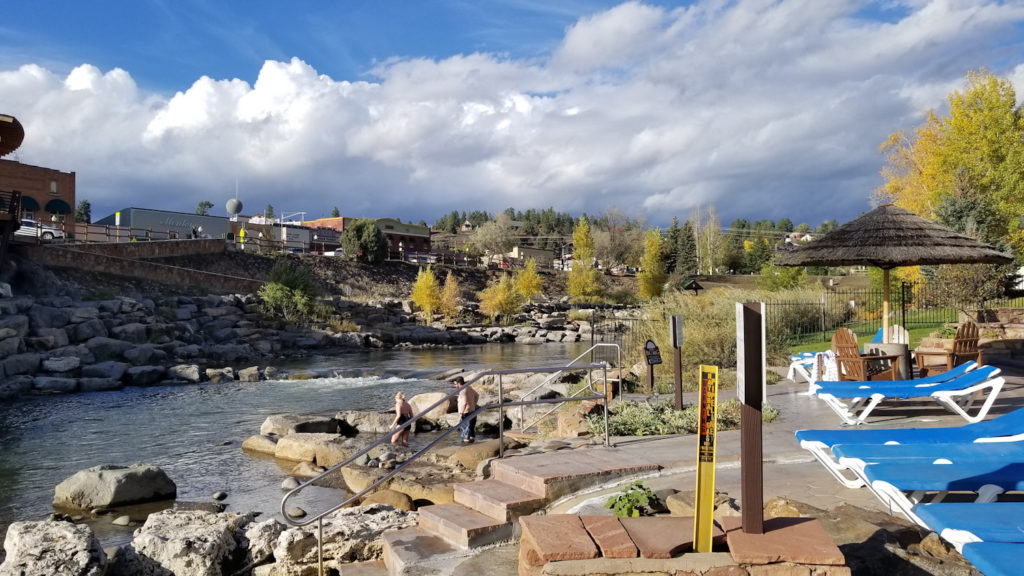 You can see the hot spring water steaming as it flows into the river. It was beautiful and despite the quickly changing weather, (it even HAILED at one point) we thoroughly enjoyed ourselves. 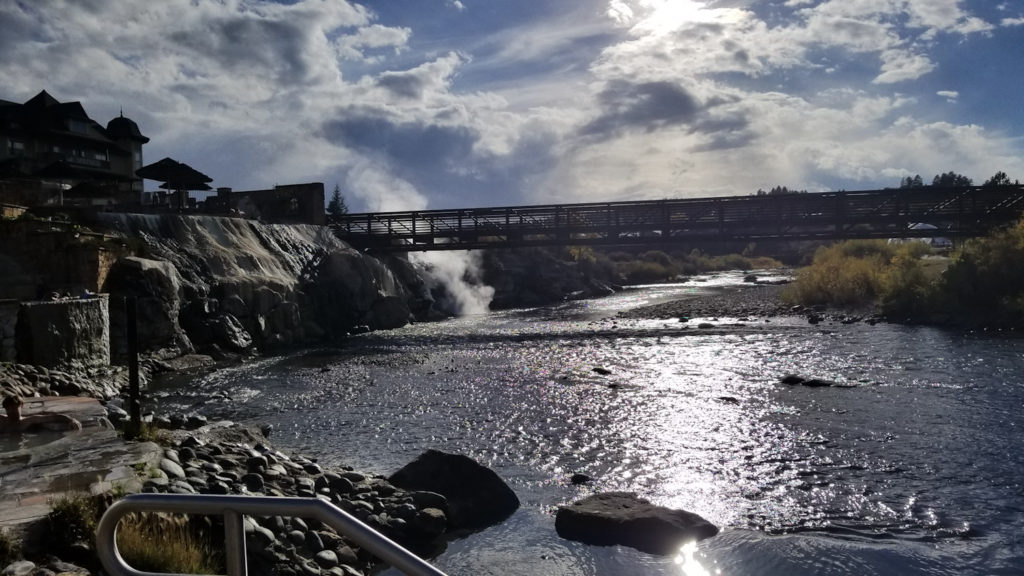 What we didn’t enjoy is the fact that the kids got colds, Alan got a cold, and for days, it seemed like all our clothes and bed sheets smelled like sulfur springs. It was coming out of our pores for days. We could taste it.Ugh.

It was time to head to New Mexico, warmer weather and hot air balloons. The drive was beautiful, and all was going well until

We were about 90 minutes from Albuquerque, and as we’re driving down a winding hill, Alan says, “Oh no. We’ve got a problem. We’ve got a BIG problem.” Things slowed down real quick and after what seemed like a very long pause, he stated that our Jeep had come unhitched from the rig- while we are going down a hill with a bank to our right. I looked in the rear camera monitor and sure enough, we could only see HALF of the car in it.

Alan was calm and cool and slowed us down carefully, neither of us fully knowing what was going to happen. When he realized the car wasn’t going to take us over the bank, he was then worried the car might ram into us when we stopped… 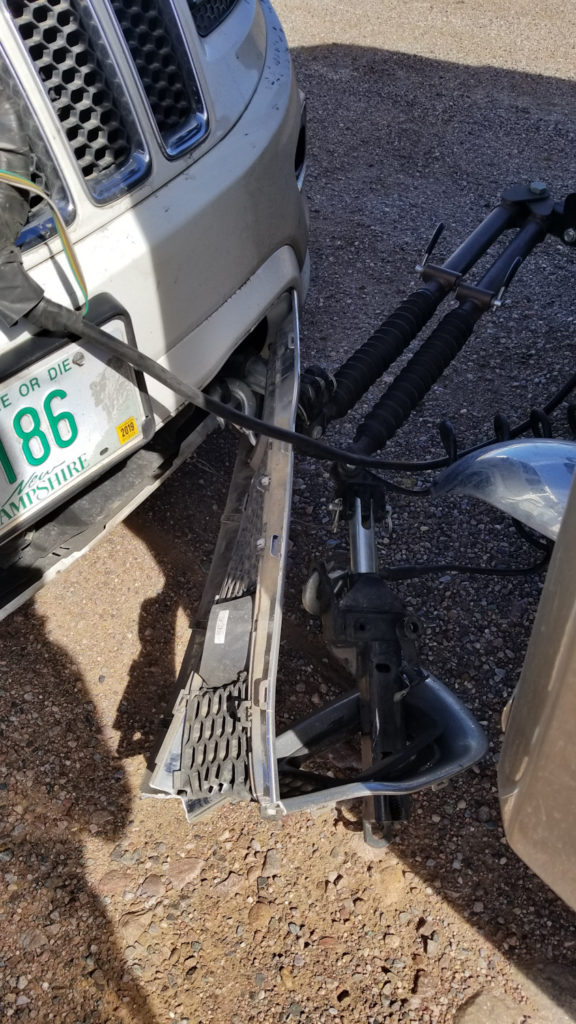 If you don’t understand what you are seeing, let me explain. We tow our car behind us when we travel. There is a base plate installed on Alan’s Jeep, (behind his grill) that attaches to the tow bar on the rig (that has 2 arms on it)  Basically, the base plate RIPPED OFF the front of the car, leaving the car to dangle by one arm as it’s being pulled behind us. 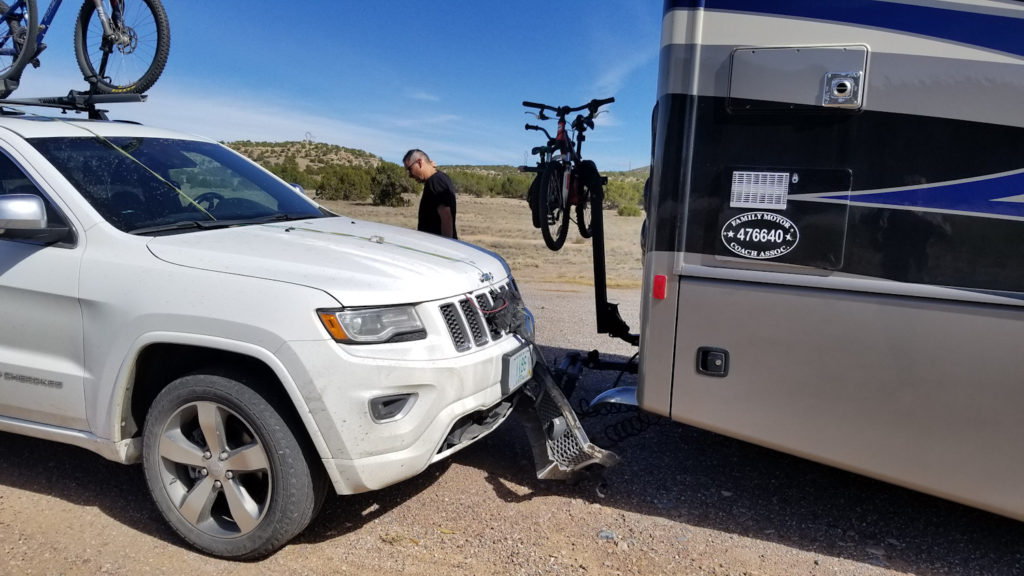 It was super scary, but when I saw what the problem was, I had a HUGE sense of relief. It sucked. It was scary, but it could be fixed. We were SO close to being tumbled off a bank, and the thought of that was terrifying. But we weren’t. We took a HUGE collective breath, took pics, detached the car and got back on the road.

Forest went in the car with me, and Harlan took the front seat with his dad. 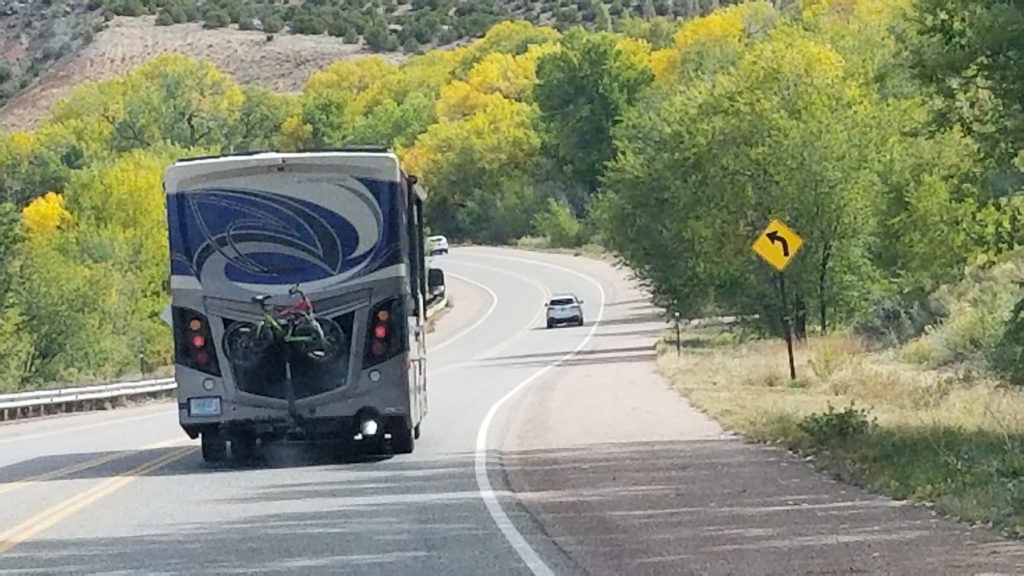 So what was the end to the story?

Since it was a Friday we pulled into the Balloon Fiesta and just decided to enjoy our weekend since there was nothing to be done until Monday (when we were supposed to move on) We got delayed another 4 days in order to get everything fixed.

What we found out was was even scarier. The initial installation of the base plate was completely faulty,causing the bolts to shear off, and our emergency breakaway cable (which brakes the car if it comes fully detached) was essentially held together with VELCRO! That means the car never would have stopped had it come fully detached.

We’d driven over 4000 miles on the trip and to think of all the passes and hills we’d been on… we are so lucky that no one got hurt. Our heads are still spinning on this one.

Balloon Fiesta will be a separate post…. It was truly a bright spot in a scary and crappy situation.

Thanks for coming along for the good, the bad and all the rest!

2 thoughts on “Balloon Fiesta or Bust! (This time, busted)”